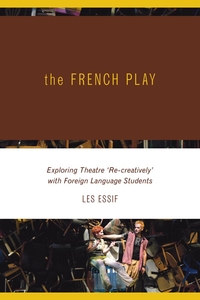 The French Play : Exploring Theatre 'Re-creatively' with Foreign Language Students is a step-by-step guide to the challenging process of producing and directing a foreign-language play with English-speaking student actors. Using his own student productions of French-language plays as models, Les Essif leads readers through the process of exploring drama and building a successful play with an eye toward applying re-creative strategies.

Essif promotes an array of new strategies for planning, producing, analyzing, and theorizing theatre, covering such essential topics as: exercises to produce a total, corporeal expression of the foreign language; performance semiotics; organization of rehearsal schedules; the collaborative assignment of roles; audience participation; publicity and promotion; taking the play on tour; and the evaluation of student actors.

Aimed at university drama students, The French Play: Exploring Theatre 'Re-creatively' with Foreign Language Students is also a must-have for scholars and teachers of performance and dramatic staging, foreign languages, English as a second language, and anyone else who requires a strong theoretical and critical approach to foreign language drama.

Les Essif is the author of Empty Figure on an Empty Stage: The Theatre of Samuel Beckett and His Generation, and numerous articles on French theatre and theories of drama and performance. He is a former New York City police officer and currently a Professor of French Studies at the University of Tennessee, Knoxville.