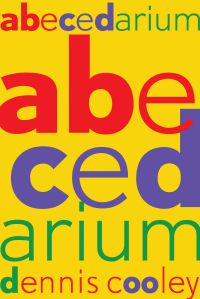 would you believe me when i make consorts of alphabet runaways & stayathomes i have rounded up where they wandered all over the page Dennis Cooley masterfully extends the genre of the abecedary to explore his curiosity of the limitlessness of human communication. With linguistic wit and complexity, his poetry carries the reader through the historical developments of the alphabet. He pries open letters and words to play with both their immediate meaning and the possibilities within the words themselves, creating surprises as he explores spelling, sound, syntax, and pronunciation. After reading Cooley's abecedarium you'll never look at language the same way. Lovers of experimental poetry as well as those interested in linguistic play or the history of language will relish the rapid-fire shifts and musicality of Cooley's newest collection of poetry.

Dennis Cooley was born in Estevan, Saskatchewan. He later moved to Manitoba, where he helped to start the Manitoba Writers’ Guild and was a founding member of Turnstone Press. He taught Canadian literature, poetry, creative writing, and literary theory at the University of Manitoba. He has published widely, including well over a dozen volumes of poetry, notably Bloody Jack (2002), and the Bentley's (2006). A recipient of the Manitoba Writers' Guild Lifetime Achievement Award, Dennis Cooley lives in Winnipeg.